by No Ramen, No Life 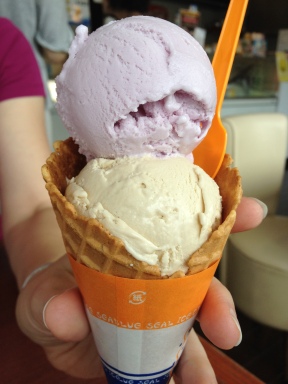 “Born in America, raised in Okinawa” is how the makers of Blue Seal Ice Cream aptly describe their product. Born after the end of World War II to provide American military service members stationed in Okinawa with a taste of home, it was was only available on U.S. bases until the 1970s when stores opened throughout the rest of Okinawa to serve the local population. Soon, Blue Seal was recognized as the ice cream of Okinawa itself, not just the Americans serving there.

In addition to the traditional vanilla and chocolate, Blue Seal Ice Cream features a variety of indigenous Okinawan flavors such as sugarcane, sweet potato (they have three kinds, including two types of purple sweet potato: ube and beni-imo), Okinawan salt cookie, and shiquasa sorbet (a type of citrus fruit similar to lemons). They also do flavors like Okinawan black sugar (which tastes like molasses) and goya (bitter melon).

On a recent visit to a Blue Seal store, I had a waffle cone with a scoop of sugar cane ice cream and a scoop purple sweet potato ice cream. Both were excellent. Sweet potato may sound like an odd flavor for ice cream to a foreigner, but it has this sweet, starchy flavor which actually tastes quite good. It was also nice change to have ice cream rather than the ubiquitous soft serve ice cream that you find in Japan. Not that there’s anything wrong with the soft serve — in fact, the Japanese have elevated soft serve to a new level, with its wide variety of flavors and creaminess. But sometimes it’s nice to have the much denser texture of old fashioned ice cream.

A number of stores sell Blue Seal throughout Japan (check out a list of stores and places that serve it here), with a few Blue Seal stores outside of Okinawa. There is a Blue Seal Cafe in the heavily frequented Shibuya neighborhood of Tokyo, right next to the Tokyu Hands store.

2 thoughts on “Blue Seal Ice Cream: A Taste of America with a Big Twist of Okinawa”